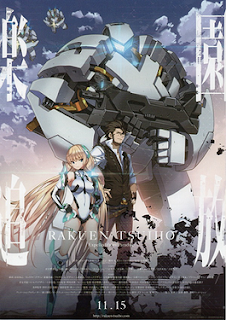 In the future, 98 % of humans don't live in a physical, but in a cyber world, their personalities uploaded into a giant virtual reality CGI world run by a computer on a space station called DEVA. Upon another hacker attack from Earth, special agent Angelica is given the assignment to find the perpetrator. She gets uploaded into a 16-year old woman's body and flies to Earth, now a desert planet, where she meets her partner, Dingo, one of the few remaining "traditional" humans in flesh. They find and locate the hacker, a robot with a personality, Frontier Setter, who is still building a giant interstellar spaceship, following a long defunct plan to send computerized humans to new planets, and was thus searching for DEVA personalities to inhabit it. Angelica returns to DEVA, but is punished for not destroying Frontier Setter, even though the latter promised not to bother DEVA anymore. She thus returns to her physical body again and joins with Dingo, helping Frotier Setter to still launch his spaceship and save it from destruction by DEVA.

Screenwriter Gen Urobuchi, known for his thought provocative and philosophically stimulating developments of stories that break the typical cliches of the genre ("Puella Madoka Magica", "Psycho-Pass") delivered another worthy contribution with "Expelled from Paradise", an anime film that tackled the topic of people living more and more in virtual reality worlds, instead of the real one, again using a popular genre (in this case, a Sci-Fi action) just as a front for a more ambitious, aspirational theme of a clash between escapism and realism. The said transhumanist concept of a brain upload into a computer is already established in the opening act, where ordinary people are seemingly enjoying playing at a beach, until the waves "freeze" while the heroine Angelica transforms into a special agent, and the audience realize they are just in a virtual reality world that is being hacked. Ethical question are also posed when Angelica's cyber personality is being uploaded into a physical body of a 16-year old girl, in order to land on Earth and search for the hacker. While there is a clear story that rules the events, its obvious point is to cause the viewers to think and contemplate about the implication of these human and computer integration, the highlight being when Dingo, a "real" human out of flesh, and Angelica, a virtual reality upload, debate about these two forms of existence ("As a cyber personality, your sensory limits can expand as far as your excessful memory allows. I've had a chance to listen to a gama ray burst that was 10 billion light years away. I've even felt around for subatomic particles with my fingertips. But still, using your bones to listen to sounds, it's the first time I've heard of that."). A major flaw is the tiresome, obligatory action finale, since the battle on a higher, intellectual level, was far more interesting, whereas the ending is somewhat incomplete and unsatisfaying, yet the authors still achieved a very good futuristic re-telling of Adam and Eve.