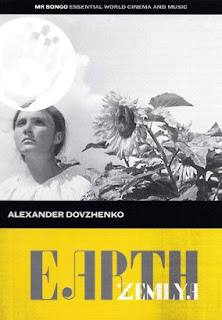 Ukraine during the beginning of Soviet collectivization. Grandfather Semyon dies, leaving the farm to Opanas and grandson Vasyl. The news of the mandatory collectivization is mixed: some farmers, mostly kulaks, would rather kill their livestock than to give it away to strangers, but the younger generation, led by Vasyl, embraces the change. Tractors are brought to the rural area, speeding up plowing for the harvest. One night, as he was dancing from joy, Vasyl was killed by an unknown assassin. Opanas holds a mass funeral for Vasyl, refusing priests or religion ceremonies. During the funeral, a man goes crazy and admits he killed Vasyl, while Vasyl's wife is in agony.

The last great Soviet silent film, "Earth" is a propaganda film that was elevated to something beyond, to a genuine, lyrical art-film thanks to the skills of director Alexander Dovzhenko who refused to focus only on the political dimension of the story. Remarkably simple, and yet so effective, "Earth" was enriched with aesthetic shot compositions (a man holding a speech while the background is covered with thousands of faces from the crowd who listen to him; the contrast between close up shots of people's faces and wide shots of the vast farms; the dynamic parallel montage of the funeral, the assassin admitting his crime and Natalya's madness as she is jumping naked in the house; branches of trees are "brushing" Vasyl's face as his corpse is carried through the village) and director's intervention. It is also full of symbolism, pertaining to the circle of life and man's connection with nature—in the opening shots, grandfather Semyon dies, signalling the end of an old era and a beginning of a new one (collectivization and industrialization of farming) while Vasyl's funeral is treated as part of the cycle, where man is born from nature and is returned back to nature after death (the final scene)—as well as a few unusual scenes that "spice up" the movie (farmers urinating into the tractor's cooler to make it start). Dovzhenko crafted a fine movie language which allowed him to shape and lead the story into an experience that stimulates the viewers more through their subconscious and emotional level than their rationality.