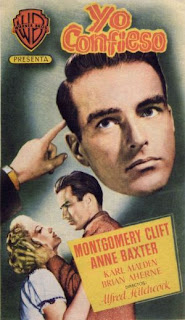 Quebec. Housekeeper Otto killed Mr. Vilet and run away to the church. There he meets a friend, priest Michael Logan, and makes a confession. But since the codex of a priest forbbids him to tell anyone the secrets during confession, Michael decides not to tell anyone about the murder. He goes to the scene of the crime and meets his old friend Ruth who is still in love with him. Since Mr. Vilet blackmailed them because he knew they were in love, the police starts suspecting Michael and in the end arrest him. During the trial, Michael still refuses to testify, but all charges get dropped on him. Otto becomes nervous, starts shooting and mistakenly admits he killed Vilet, thus the police shoot him.

Alfred Hitchcock, who again has a small cameo as a man exiting from the church, once stated that he never should have made "I Confess". However, even though that film has big flaws - the interesting story that gives a critique of illogical rules of the church is half-heartedly and schemtically made and as if it wasn't sure if it should be a thriller or a drama - and didn't bring any kind of awards, but it's still a quality piece of cinema. The best ingredient is the charismatic appearance of actor Montgomery Clift, but also some fine questioning of the already mentioned religious dogmas. All scenes as even, avoided any kind of pretentious or tendentious outburst, while even the weak ending seems all right. "I Confess" is not an ontological achievement due to mild execution, but it's still satisfaying.