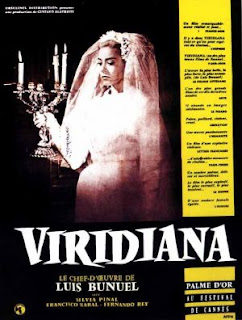 Nun Viridiana is sent to visit her only living relative, uncle Don Jaime. She complies and stays at his mansion for a few days, even though she doesn't like his secularism. Jaime is in love with her because she resembles his deaceased wife, and thus puts her to sleep with a sedative. He brings her to bed and kisses her, but then stops and leaves. The next morning, when she wakes up and he lies that they slept together, Viridiana leaves the estate, even though Jaime admits he lied. But just as she is about to leave, she hears Jaime hanged himself. Feeling remorse, she decides to dedicate her life to the poor: she randomly collects a dozen beggars and brings them to Jaime's mansion, also inhabited by Jorge. One evening, the beggars go wild, create a big feast and try to rape Viridiana. The police gets there and stops them. Jorge teaches Viridiana how to play cards.

Winner of the Golden Palm in Cannes, "Viridiana" is one of the more subtle and positive films of sardonic, atheist director Luis Bunuel, even though his satirical jabs at religion were obviously bitter enough to stir up controversies and get the film banned in Spain in 1961. Gorgeous Silvia Pinal is great in the leading role of Viridiana, a noble nun full of grace, but the story around her is built in a cynical contrapoint that makes an inversion of her good deeds that all end up in a disaster, underlying the film's hidden motif that religion can't change anything in the harsh reality. Luckily, Bunuel didn't go overboard with his dark negation, nor did he try to force his world views on the viewers, even though some of those traces can be found - one sequence of Viridiana praying together with the beggars is constantly intercut with such random earthly scenes of dirty water splashing in a wheelbarrow or construction workers hammering the rocks, which gives it a funny undertone, and the legendary cult finale where the dozen beggars are all sitting at the table and at one moment look exactly like the Da Vinci's painting "The Last Supper" before a woman "flashes" them with her skirt. Still, it seems as if the story also has sympathy with the innocent Viridiana since some scenes are actually sweet and gentle, like the scene where a bee in the water gets saved from drowning by a board. The whole film is very straight forward and sometimes deliberately "worn out", yet the provokative tone gives it a dose of undated flair.