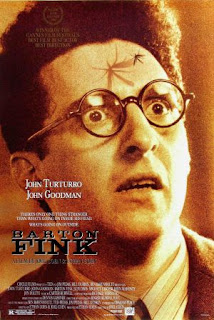 New York, early 1 9 4 0s. One famous Hollywood studio chief hires the young screenwriter Barton Fink to come to Hollywood and write a script for him about a wrestler. But once there, in his new home, a hotel, Fink suddenly doesn't have any inspiration for such a B concept and just vegetates, while his cheerful neighbor Charlie often drops by. He meets Audrey and sleeps with her, but when he wakes up in the morning, he finds her murdered in his bed. It turns out Charlie is a serial killer. Fink then writes the script, but the chief doesn't like it, so he leaves to a beach.

Winner of the Golden Palm in Cannes, nominated for a Golden Globe for best supporting actor (John Goodman) and for a Oscar for best supporting actor (Michael Lerner), "Barton Fink" is a rather stiff and uneven junction between thriller, drama and satire on Hollywood's screenwriters, whereas it even seems that the Coen brothers themselves had writer's block and decided to make a movie about it, in the metafilm manner of Fellini's "8 1/2". From every aspect of "Fink", it's obvious that the Coens are behind it, especially in their tremendous care for little stylish details, like a mosquito on a human skin or wallpaper hanging from a wall—whereas they sometimes deliciously spoof big Hollywood's treatment of small screenwriters ("The contents of your head are property of Capitol Pictures!")—but the thing simply isn't that funny. Here, their emphasis lies in the strong mood and psychological observations that go to such measure that they completely control the reaction of the audience and take many functions—from a sustained display of grotesque problems that bug Fink and every other person, up to a cold portrait of our banal-dysfunctional society. Still, there is one big complaint: just like their title hero, they are slightly lacking true inspiration, and thus one irrelevant subplot stands out like a sore thumb (the serial killer subplot) since it was just shoehorned into the thin main storyline, resulting in a good, stylish film, but a one that has too much empty bizarreness which lead nowhere.