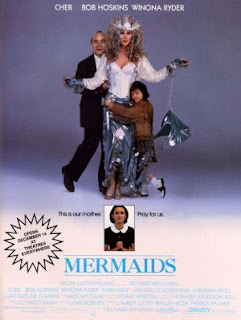 USA, 1 9 6 0s. The 15-year old Charlotte lives peacefully with her younger sister Kate who likes swimming, but constantly gets into clashes with her mother Rachel. Namely, Rachel changes her men more often than her socks, and every time she ends her relationship with someone she moves to a new town. That's why Charlotte has a hard time adjusting to anywhere, dreaming of becoming a nun. The female trio meets Lou, a shoe salesman, who becomes their new father, but the biggest change happens when Charlotte herself falls in love with a guy, Joe. While the two of them become intimate, she forgets about Kate who almost drowns. But she gets saved and makes up with her mom.

Exclusively due to wonderful and touching performances by actors, especially by Winona Ryder, do "Mermaids" create a wonderful mood and become easily watchable, but a high amateurism from director Richard Benjamin, inconsistency and uneven, undecided screenplay make this just a routine coming-of-age film. And quite frankly, the title is rather pointless. Among the greatest virtues are the nostalgic flair and a shaky, but neat mix between drama and comedy revolving around an outsider girl, the 15-year old heroine Charlotte, even though her interaction with the world was left underused, while the dark accident that occurs somewhere near the end gives the story a sharper edge, even though it was bizarrely shown at the paralel moment when Charlotte becomes intimate with her boyfriend for the first time. It's also rather unnecessary that the plot is set during '63 when Kennedy was assasinated, just to superficially use his death as a polygon for Charlotte's random misery, but as a whole the movie is more than just charming, which isn't a small thing, and Cher's song became a huge hit.