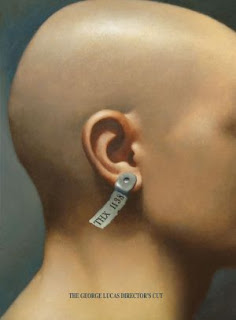 The future. People live under the Earth's surface and drink pills which kill their emotions. Intercourse is forbidden while the religious cult of a man called OMM is obligation. Among those people is also THX 1138 who works in a robot factory. But one day he falls in love with his roomate, the girl LHV. When the couple becomes intimate, the police throws them in jail. THX and his friend he met maange to escape, but only he reaches Earth's surface, which is a wasteland.

For his directorial debut George Lucas decided to expand the running time of his student short film "THX 1138" from 11 to 85 minutes, but the overstretched impression is thus more than obvious. "THX" isn't uninteresting since it's a dystopian Sci-Fi film that's a complete opposite of his fairy tale "Star Wars": it's dark, depressive, realistic and tart, revolving around a story set in a bleak future where bald people live under the Earth's surface (due to pollution after a nuclear war?) that provokatively mocks materialism and totalitarian society in which individuality is even lost in cold names like LHV. One of the best sequences is the one where robot policemen suddenly simply stop chasing after the hero because their pursuit budget ran off. Still, although stylish, the movie is also sterile. The run of the hero from the society was so overlong it took over half of the film's time and many things are left vague and cold, even though the final scene is great.