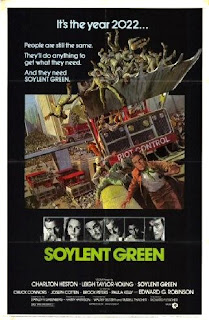 In the year 2022, New York is heavily overpopulated with it's 40 million inhabitants, just like the whole world, while the main food source is the synthetic 'Soylent Green'. Detective Thorn gets the assignment to investigate the murder of rich lawyer Simonson, falling in love with his girlfriend Shirl. He finds some documents and sends them to his old 'library' partner Sol. When his boss orders him to shut down the case, Thorn discovers there is a major conspiracy. Sol goes to die in the death chamber, while Thorn discovers that the ocean is dying and that 'Soylent Green' is made out of people.

Cult science-fiction drama "Soylent Green" is a bitter allegory of what overpopulation might lead to, and today with all the news that the agriculture has problems keeping up the pace with the growth of the population, environmental pollution and GM food, it seems more prophetic and scary than ever. The 1970's were an amazing era, probably the most daring for cinema in the 20th Century, establishing a modern feel to realistic movies that has stayed until today, and even though "Soylent" is at times slightly ephemera, too simple and apocryphal, as a whole it's an intriguing film with a few brilliant moments - the scene where Thorn (Heston) is exiting his building literally filled with homeless people sleeping on the stairs is shocking and subtle at the same time; the opening montage sequence of old photos that show the US from the early 20th century, when it was underpopulated, until the year 2022 when it got overpopulated, is genius; while the seemingly trivial moment where Thorn and Sol (Edward G. Robinson in his last role) have prepared beef stu out of real beef, not some synthetic food, and eat it with such astonishment and devotion as if it's the best delicacy in the world, is so contagious it makes you hungry. The plot twist at the end is already known to everyone, but that final frozen frame with Thorn's arm is still unforgettable, while director Fleischer nicely summed up the point of lovely images of nature in the closing credits on the audio commentary of the DVD, stating how they are there to "show us what we have now and what we will loose if we don't act now".