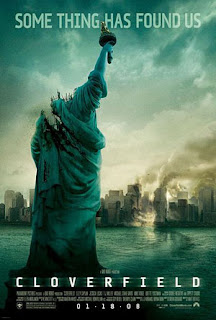 A tape with a "Property of the US Government" sign starts, stating a place "Formally known as Central Park". New York. A guy named Hud is filming a farewell party for his friend Rob, who is about to leave for overseas. But all of a sudden, while they were on the balcony, they spotted an explosion in town. In panic, everyone runs out of the building and witnesses how the head of the Statue of Liberty falls on the street. Rob, Hud, Lily and Marlena go with the rest of confused people to the Brooklyn Bridge, where they spot a giant monster still attacking the town. They hide in the subway and go on to search for Rob's ex girlfriend Beth stuck in her apartment. Marlena dies from a monster attack. When they get to a helicopter, the monster crashes them down and they die.

Whoever wondered how a movie mixing "Godzilla" and Dogma 95 would look like, should watch "Cloverfield". The whole film seems to take a completely radical turn on the monster movie genre since it is filmed entirely with hand-held camera presenting only the perspective of the four protagonists who get stuck in New York in the middle of a monster attack and leaving everything else open to interpretation: kudos to producer JJ Abrams for sticking to this hermetic concept of screenwriter Drew Goddard and not producing another typical big budget monster movie where everything is spelled out. The whole first 15 minutes are calm, presenting the atmosphere of a farewell party for Rob, but all of a sudden there is this great scene where Hud, who is filming the whole event all the time, spots an explosion and zooms in to it.

From there on this is a wild ride with a few virtuoso directed scenes that blend realism and fantasy (the explosions hit the roof of the building just when everyone is running outside but the camera just makes cut, cut, cut and another cut; Jason waves at the Brooklyn Bridge just when the tail of the monster crushes it; Hud films a TV screen showing images of the monster; the helicopter scene where they first spot the entire monster from the bird perspective), even though the shaky camera might cause the viewer feeling dizzy. Still, the film has two major flaws: first off, at 75 minutes, it seems too short, thin and rather one sided. Secondly, it ends in a disappointing manner because it offers no context. There are hints at 9/11 and natural disaster, but in the end it seems the monster is just a 'plot device'. 2 years before "Cloverfield", Bong's "The Host" showed how it should be done: his monster is incorporated into a clear socio-political context, which means it's not just there without a reason, but with a function inside the story. Sadly, "Cloverfield" lacks that. Still, one simply has to give the authors credit for making such an unique, albeit flawed film, because the first 50 minutes are fantastic.