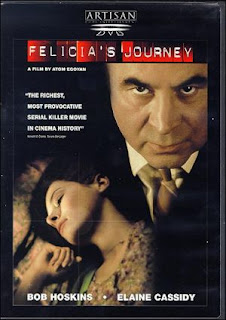 Hilditch is a popular cook whose late mother had her own cooking show. Irish girl Felicia travels with a ship to Britain in order to find her boyfriend Johnny and tell him she is pregnant, but he never gave her his address. Wondering around, she is found by Hilditch with his car who gains her trust with his kindness. Even he figures Johnny didn't want a relationship with her, but still pretends that he is trying to help her find him. But in reality, Hilditch is a disturbed psychopath who already kidnapped and killed 9 girls, and in order to present himself even more harmless, he brings Felicia to a hospital. Finally, he brings her to his house and pays for an abortion. Just when he was digging a grave, two women show up trying to sell him a Bible. Hilditch hangs himself, Felicia, all confused, runs away.

Tragic-melancholic story about a lonely serial killer was directed by Atom Egoyan very demanding way, and in a way so that every viewer can interpret it in his own way, avoiding the typical cliches of that genre, putting more emphasize on emotions than thriller elements. It's a disturbing psycho gram of a deranged man, but surprisingly also done with a lot of subtly provocative messages that show sympathy for his life without love, where he only tried to get affections from girls in a wrong way, thus the whole movie is quiet and without scenes of murder, accompanied by idyllic music: already the sole opening long take scene shows the ambitious approach as well as some unusual camera solutions. The way Bob Hoskins plays the anti-hero, with an unrecognizably gentle voice and stoic grace, is truly inspirational and gave the British actor without doubt one of his 2-3 best performances of his career, while Egoyan gives him excellent dialogues that seem as if they came from some gentleman from the 1950's. Hilditch and Felicia are the only portrayed characters, but are both done in a very satisfying way. The reason why "Felicia's Journey" has some deniers lies in some of it's flaws: empty scenes, a bizarre ending and a little bit too slow pace.