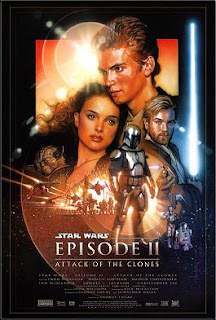 Thousands of Solar systems form the Galactic Republic, but some demand separation under the influence of the evil Count Dooku. In order to keep the stability, the Senate gives Jedis Obi-Wan Kenobi and Anakin Skywalker the asignment to protect Senator Padme Amidala. Obi-Wan follows the trail of the conspiracy that leads him to water planet Kamino where an army of clones is getting created for the Senate, even though nobody ordered it. The order was given by Dooku who captures the Jedi and Amidala. Still, the army of the Republic frees them, while Dooku escapes. Anakin and Amidala get married.

When George Lucas announced that the title of the second "Star Wars" prequel will be "The Attack of the Clones", many fans assumed he was either kidding or it was just a case of gossip journalism, but they were all surprised that the trashy title remained, foreshadowing the further fall of the saga into cheap storytelling. Sadly, the Force was not with Lucas on this one either: even though "Clones" are better than "Phantom", they are still just a sufficient film overfilled with banal dialogues and incredibly stupid design of aliens, from creatures with three eyes or four hands up to silly Bushmen like shrieks that are suppose to be a foreign language, while the character of Yoda who is supposed to be the main Jedi while he can't even speak English with proper grammar ("We in great danger be!") is a joke. Actually, the whole film seems at moments like a parody, except that it's too serious. In short, a B story with a big A production. Still, the film has virtues: a long time ago, John Milius resented the original "Star Wars" due to their lack of intensity, noticing how he would have liked to see a Jedi kill a little kid and create a real drama, and something like that really happened here; namely, in a very dramatic and authentic scene Anakin finds his mother captured in a tent, but she dies a short time later. In a moment of rage, he finds the aliens who kept her imprisoned and uses his laser sword to cut their heads off. The politics in the Republican Senate, though underused, are very interesting, mirroring some timeless fears of democracy getting swallowed by dictatorship (though it is very underdeveloped and never elaborated), while the finale in the arena in which Anakin, Amidala and Obi-Wan are tied to poles and fight monsters attacking them, who look like a mix between insects, dragons and rhinos, is especially exciting.