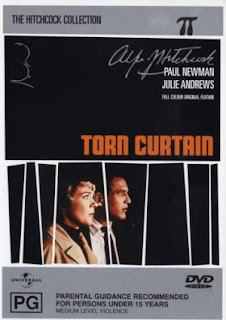 Copenhagen. Professor of physics Michael Armstrong and his fiancee Sarah arrive in town to attend a meeting, but when she accidentally picks up a letter meant for him, she finds out he doesn't plan to fly to Stockholm, but to East Berlin, behind the Iron Curtain. She secretly follows him on the plane and is shocked to find out he publicly announces he will collaborate with the Eastern German government in order to produce a new type of advanced missile, Gama 5. But he eventually tells her he is a double spy and actually works for the American government in order to get a secret formula from the scientist Lindt. When he does, they escape in a bus and then in a ship to Stockholm.

As Truffaut wrote in his book "Hitchcock" about the 'master of suspense', in movies "suspense is actually a privilege because it makes the dramaturgy more intense". In one of his last films, the spy thriller "Torn Curtain", Alfred Hitchcock once again offered his virtuouso directing style in creating suspense, but there are simply too many filler episodes between those highlights that prevent the viewer to enjoy them completely in this standard story. Still, the ones that are there work marvelously, from the exposition where he mischievously placed a scene of Michael and Sarah cuddling in the cabin bed, up to the exhausting, memorable, brilliantly directed 4 minute sequence where Michael and the German woman kill the enemy Gromek in the secluded farm, filled with numerous details (she stabs him with a knife that breaks in two; pull him to the oven to suffocate him) that show realistically how hard and painful it is to kill a human. Even the sequence where the spy couple are driving in a fake bus, escorted by the police, was hailed rightfully since it created suspense with the director's trademark "dilemma situation" just by having the fake passangers fall in panic when they spot the real bus driving just a few hundred yards behind them, while Paul Newman and Julie Andrews are in good shape.