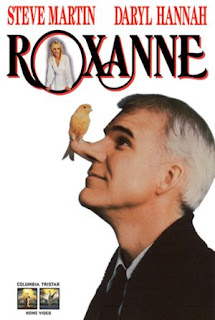 C.D. Bales, a very kind person, is a chief of a clumsy firemen station in a small town. But, he has a small problem - his gigantic nose. He hates it so much he beats up everyone who dares to mock it. One night, he helps the blond Roxanne, who locked herself out of her house, and falls in love with her, but is afraid to tell her due to his nose. When she starts dating his fireman employee Chris, he helps him write poetic love letters to her. Still, Chris leaves with the waitress Sandy and Roxanne discovers C.D. wrote all the lettres, upon which she falls in love with him too.

Steve Martin delivered one of his best performances as the "Pinocchio" nosed C.D. Bales in the gentle, tame and sweet romantic comedy "Roxanne", which he wrote himself as a modern adaptation of the famous French play Cyrano de Bergerac. Simple, never too sweet or sentimental, but emotional nontheless, "Roxanne" is crafted in a very smooth way and shot in the background of the wonderful landscapes of Canadian town Nelson, while the sustained humor has its fair share of moments, especially in the legendary sequence where C.D. autoironically delivers 25 various gags about his nose in a bar, from "Your nose was on time, but you were 15 minutes late" up to "Watch out, it's gonna blow"! This light and charming comedy works with ease even today, even though the "bad guys" who make fun of C.D.'s nose are presented as a caricature and the important subplot where the hero expresses his feelings towards Roxanne through the moronic Chris becomes rather annoying and lingering after some time. Steve Martin was nominated for a Golden Globe as best actor in a motion picture - musical or comedy, while some critics even prefer his Bergerac interpretation more than Depardieu's in the famous film "Cyrano de Bergerac" completed three years later - but the latter had a more mature ending, faithful to the original play, unlike this one that took a safe happy ending.