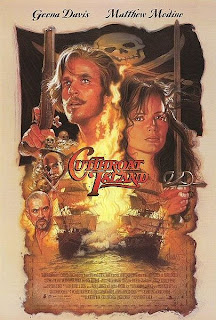 Jamaica, 1668. The place is full of deceit and greed. Before his death, Captain Black Harry tells his daughter Morgan that a map is tattooed on his skull which shows the location of a legendary island with hidden treasure. By scalping her father, Morgan discovers it's just one third of the map so she heads off to find the rest. In that intent, a slave is helping her and falls in love with her, but pirate Dawg wants to stop them. After a bunch of adventures, they in the end battle with ships on the sea. Dawg has a treasure on the ship, but gets defeated together with his gang. The ship sinks but the gold swims on the surface and Morgan takes it.

Whatever film Geena Davis made with her ex-husband Renny Harlin, it marked a step back in her career. This big budget pirate adventure has a 100 million $ budget, impressive set-design, ships and explosions, but average story. Still, "Cutthroat island" is better than it's negative reputation because it doesn't make big mistakes whereas some scenes are pretty good. That lifts it somewhat above the mediocre tangles and old fashioned action, but not enough to completely distinguish itself from them or too keep the viewers concentration until the end. Who of the pirates will find the treasure is something that's not interesting at all, which is why the film stops just at being watchable. Again, the best performance of the cast was delivered by charming Davis as the heroine Morgan who sometimes even steals the show of the stiffly written roles of Matthew Modine's and Frank Langella's characters.