The Rhythm of Crime 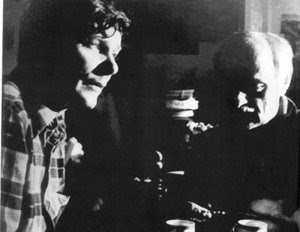 Teacher Ivica lives alone in his house in Trnje in Zagreb. In a few weeks his home will be torn down because the government plans to build an apartment building there, so he is surprised when an unknown statistics expert, Fabijan, begs him to be his tenant. Ivica takes him in and they become friends. Fabijan tells him about his unusual hobby: statistical predictions of crime. According to him, intellectuals commit crimes during winter and underground members during summer, so he predicts that in the house of Zdenka, Ivica's ex girlfriend, a burglary will occur. And that really happens. Fabijan also predicts the evasion of a secretary and his own death on the river. Ivica continues with his work.

In '97, Aronofsky shot the unusual Sci-Fi drama "Pi" that had a concept about a young genius who discovered a number that could explain and predict the events in the whole Universe, but, unfortunately, he didn't exploit the rich potentials of the story. Little is known that a similar story appeared already in 1981 in the unknown cult drama "The Rhythm of Crime" that used the premise somewhat more active: in it, expert Fabijan (very good Fabijan Šovagović) uses statistical data to calculate when and how some crime will happen in the town, by which the story poses a few thought provoking questions about human free will, fate and destiny. In one amusing scene, Fabijan wins in a chess game and Ivica asks him jokingly: "Do you even use your statistics to win at chess?", while he replies with: "Yes. We just have to imagine that white pieces represent good, progress, and the black evil!" The best sequence, however, is when he calculates that a fight will break loose in a bar, so he sits there and waits with a bedazzled Ivica for it. After a few hours, they are ready to leave, but just then some guy really loses his temper and hits some other guy, which causes Fabijan to say: "There! See?" Director Zoran Tadic crafts the film in a competent and wonderfully calm way, but in the end one has got to admit that a lot more could have been made out of the tantalizing concept, while there is no suspense in the story, despite it being very enjoyable.