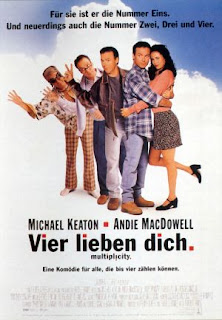 Doug Kinney is a stressed construction engineer who always complains of having too much work and too little time for his wife Laura and children Zack and Jennifer. So he meets up with a scientists who developed the method of cloning humans and asks him to make a clone of himself to help him share his work. The cloning is a success, and the clone, called "Two", is helpful, but also an annoying macho. "Two" makes a clone of himself, "Three", who is feminine, and "Four", who is half-retarded. When the original Doug becomes annoyed, among others because they sleep with his wife, they agree to leave and open their own Pizza shop.

Harold Ramis, after directing one of the best comedies of the 90's, "Groundhog Day", still has sufficient taste for the lesser Sci-Fi comedy "Multiplicity". Even though that film is quite weaker due to the rather heavy handed comic approach towards the cloning and too mainstream setting, it's still a very imaginative achievement: some observations and ideas are intelligent (the opening credits appear multiplied on the screen), many scenes are funny while the charm is simply indisputable in such scenes like when Doug is beating one of his clones with a bouquet of flowers or when he cooperates with "himself". The idea of having clone "Four" turn out dumb was wrong, but Michael Keaton enjoys his performance as four Dougs, especially as the amusing clone "Two" and "Three", who are surprisingly opposite as a macho wise guy and a gentle feminine man. Some of the banal gags are cheap, yet Ramis has just enough style and sharpness to carry the film even at weaker moments. Still, that idyllic result is rather ruined by a strange ending, several corny jokes and Ramis' lack of character development for Andie MacDowell's one-dimensional character.