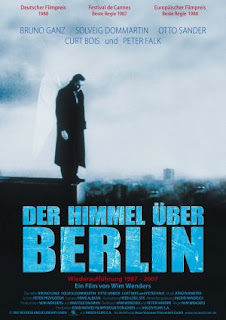 Black and white cinematography: the clouds over Berlin pass equally fast as it's busy citizens. They are observes by angels Damiel and Cassiel and are able to hear the people's thoughts, but are forbidden to intervene in their fate. Cassiel is fine with that state, but Damiel would gladly want to feel something, eat, breathe the air or take a bath. In circus, he falls in love with Marion who works on the trapeze, while he meets an actor on the set of some World War II film: he admits him he was once an angel too, but decided to quit. As soon as Damiel wishes for that, he becomes a human and starts to see colors. The actor gives him money to manage, while Marion falls in love with him. He writes in his diary: "Now I know what no angel knows".

Deep spiritual film making and contemplative messages about life are attributes of very good "Wings of Desire", a film that, just like almost every Wim Wenders film, is minimalistic and static, whereas the US made a remake of it 11 years later, "The City of Angels", but with a more emphasized romance. Wenders here patiently crafts a quiet story with symbolical questions about two kinds of people: the cold ones who play it safe, superior, never dare something and keep everything at distance and control (the angels) and those who are inferior, crushed by problems of life, but at least daringly try to live life the way they want, and actually feel something (the humans), alas developing a fluctuation from one branch into another. He cleverly emphasized the emotions of the hero Damiel by the fact that the cinematography is black and white while he is an angel and full of colors as soon as he becomes a human, while the scenes are poetic (for instance, the one with the "soul" of an object that separates from the real object when an transcendent angel picks it up). Peter Falk is excellent almost experimentally playing himself, while the weakness of the film is manifested in one-dimensional character of Marion, empty or boring situations, a few too slow moments or occasional tedious-art approaches. It's also interesting when Damiel writes how he "now knows what no angels doesn't", namely how it is to feel something, while there is even a statement "To be continued" at the end, which all add up to the philosophical touches of this melancholically slow film.