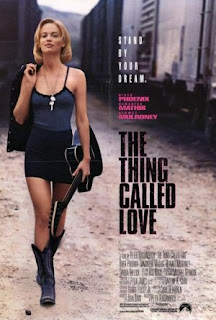 The young Miranda has ambitions of becoming a Country singer and writer so she moves from New York to Nashville in order to participate in an audition, but she gets there late so she is forced to wait one week until a new one is organized. She meets a chaotic young guy, James, who is also a Country fan, and Kyle. She finds a place to stay in a nearby motel but cancels it to save her money and moves at her friend Linda. Miranda falls out at a competition so she takes a job as a waitress. James takes her to Graceland where they get married, but as they return they enter into arguments more and more. Miranda leaves him and decides to return to New York, but changes her mind and wins at the competition, while James returns to her.

Peter Bogdanovich overwhelmed the critics with his 2nd film "The Last Picture Show", but in this superficial Country music drama he is in critical lack of inspiration, which is why "The Thing Called Love" talks about Country music but it is featured very scarcely throughout the film, and even the soundtrack is quite thin. Bogdanovich knows how to occasionally fill a situation really good, but his genius from the 70s was obviously left behind in the 90s, whereas the biggest blames go to the empty story filled with overlong and ordinary dialogues, while the running time was painfully overstretched to 110 minutes, even though could have objectively speaking ended in only 40. Besides the fact that this is one of the last films starring River Phoenix before his death, Samantha Mathis is the only real virtue here, but sadly, 1993 wasn't such a good year for her, which is why "Love" grossed only 1.1 million $ at the US box office.