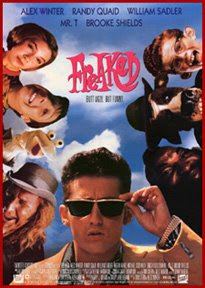 In some show, famous actor Ricky Coogan tells his story hidden behind a shadow: the E.E.S. company hired him to be their promoter for a toxic fertilizer "Zygrot-24", and he accepted for a 5 million $ salary even though one employee transformed himself into a child with a moustache in front of his eyes. After he threw a fanboy from a flying airplane, Ricky and his friend Ernie came to South America, where he followed environmentalist Julie to one amusement park, "Freaked", and saw a fat man with a frog tongue. His creator was the bearded Skuggs, who used "Zygrot" to make a half-man half-monster from Ricky, while he merged Julie and Ernie into a two-headed creature and closed them into a toilette. There they also met man-sock, man-cow, man-woman, man-worm, man-fart, man-dog. They entertained the audience until they dug out a tunnel out and ran away.

Complicated fantasy comedy by director/actor Alex Winter, "Freaked" are an unusual but also funny film, that isn't too "hard" for viewers younger than 12 because Winter was still a person more inclined towards humor, than horror. Their potential fear is somehow close to "Gremlins 2", but the humor reminds a lot towards some black comedy "Simpson" episode: it has an equal amount of wild (throwing up; Winter decapitates the head of the bad guy and throws it into the eyefield of the camera which goes red; fast-forward scenes) and tame jokes (man-woman; moments such as when Coogan is trying to lure the milkman inside: "I just laid a turd that's the spitting image of Kim Basinger! And she's naked, too!"), combining silly and sharp, childish and adult. It has style, but it's truly filled with everything which is why despite its short running time of 80 minutes it seems too long, the ending is happy but contains too much weirdness, yet despite that or maybe precisely because of that tone that separates it from "normal" movies, "Freaked" rightfully enjoys cult status. Among the unbelievable jokes is the fast-forward scene where the hero Ricky pushes his fanboy and a table from a flying airplane.