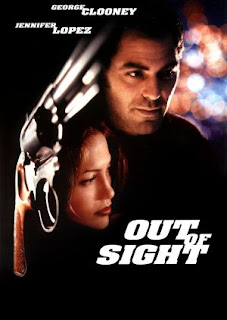 Robber Jack Foley goes to a bank and asks a cashier to give him money or otherwise his friend behind him will apparently shoot the boss - but it's a lie because that "friend" is some man who doesn't even know him and carries no gun. The police arrests Jack and puts him in jail, but he escapes through a tunnel where he and his friend Buddy take police officer Karen Sisco as a hostage. But she persuades their colleague Glen to run away with her. Occasionally, Jack and Karen stumble upon each other, but don't do anything because they fell in love. Jack plans a robbery of a mansion of the rich Ripley with Buddy and three other criminals who intend to rape a housemaid, so he kills them after he find diamonds. Karen shoots Jack in the leg and arrests him.

From Elmore Leonard's novel "Out of Sight" came this unconventional crime film full of wonderfully polished mood and neat ideas, among others the fact that actor Michael Keaton appears some 42 minutes into the film and reprises his role as police agent Ray, who already appeared a year earlier in "Jackie Brown", another adaptation of Leonard's opus. "Out of Sight" was nominated for 2 Oscars (best adapted screenplay, editing) and is convergent to the movie opus of talented director Steven Soderbergh, who will direct the acclaimed drama "Traffic" two years later, but it's still slightly unfinished, occasionally lukewarm and towards the end rather worn out. But the film simply has so many highlights that it would be a sin to dismiss it, from top-notch dialogues ("He has to pay me money or else I'll kill him!" - "But if he's dead he can't give you money." - "Well, then I'll wound him." - "But then he will be transported to another prison." - "...Why don't you go outside and smoke?" - "I don't smoke.") or humorous moments (a thief trips on the stairs and accidentally shoots himself dead), yet the most thorough virtue that shines through the film is the sole inspirational-refreshing idea of having an attractive, beautiful woman, Karen Sisco, play a tough police officer and interact with the charming robber Jack - that came from Leonard when he saw a picture a female federal marshal in Detroit News - which creates such an elegant energy that it's easily one of 2-3 best performances of Jennifer Lopez's entire career.