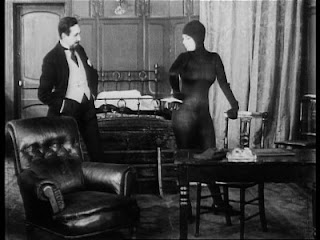 American millionaire George Baldwin has been robbed by criminal Norton, so the Vampires send Irma Vep to rob Norton's map showing the treasure hidden in the forest. However, she is captured by Moreno, who brings her to his hideout and falls in love with her. Moreno and Irma record Baldwin's voice and forge his signature in order to steal more money from him, but are arrested by the police thanks to Mazamette and Philipe. Moreno is executed, but Irma manages to escape when the ship transferring the captives is hit by cannons of Satanas, the grand Vampire. Satanas is arrested, but commits suicide.

Parts 6, 7 and 8 are more dynamic, but still not enough to warrant the overrated and overhyped reputation of Louis Feuillade's "Les Vampires" crime film series, which went on for way too long by spanning an unnecessary six hours of running time in total. The movie suffers from a very uneven pace, which ranges from empty to stacked with events, as well as some clumsy traits - such as the tendency of the actor playing Mazamette to often look into the camera - whereas the highlight is Musidora anyway, who here finally appears more often in her black "robber suit", which is so cool it secured her a place in the hall of fame in cinema, sparked numerous copycats in modern cinema and made it instantly clear why Moreno would fall in love with her when he meets her in person - even though she appears barely 5 minutes in it, while she wears her regular "civilian clothes" for the rest of the film series. The story is plain straightforward, and thus conventional, yet a few moments of spice manage to ignite here and there, such as when villain Satanas hides a bomb in his hat or the "split screen" scene where he is on the left side of the apartment wall, spying on Mazamette who is in the lobby, on the right side of the screen.