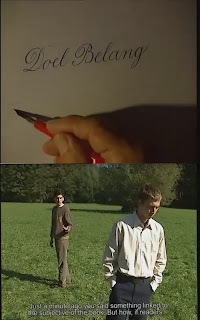 A writer writes a book with the title "Doel Belang". Adam is a gardener in a picturesque orchard. After an apple falls on his head, a stranger, only known as Mobil, shows up and helps him stand up, but also inspires him to think about the nature of life when he poses a thought-provoking question if they are possibly all characters in a book with an author. Adam abandons his assignment of painting a fence and goes on a quest to find some answers. He meets a man buried up to his chest in soil; Thomas, a man without any opinion and a painter, who contemplates if their book was maybe left unfinished. Adam finally has a vision of a woman at night, and hears the voice of the writer who informs him that his task was to paint the fence - in the story in the book, Theodore's daughter Gudinne was suppose to return to her hometown after 20 years, which would be identified by a black fence. Since Adam did not paint it, she continued driving, and hit and killed Doel Belang, which will demolish the point of the book. Adam cries and the writer finishes his book.

Some films deserve to be taken out of the sands of time, since they display remarkable philosophical, spiritual and intellectual exercises, rarely seen in cinema. "Doel Belang" is an unassuming little short film created out of pure inspiration, which does not send its messages in a tedious-pretentious way, but instead does this with unbelievable elegance and simplicity. Its title is a Dutch wording for "the singificance of meaning". Its supposed theme at first is that characters that inhabit it wonder if they are just characters in a book with an author - but from it the film's real theme emerges, namely the questioning of reality, our world, the Universe and God. Adam, the main protagonist, is a symbol for the care-free person who is content with his simple life and his orchard. Until he is visited by a stranger, Mobil, who stimulates him intellectually by posing the question: "Do you ever wonder about the meaning?" Mobil does not know the nature of their world, either, but speaks hypothetically about the implications if they are inside a book: "Do you see how terrible that would be? It means that we had already been written, predestined for ourselves. Of course, it isn't terrible that you're predestined to be good or bad, terrible is the thought itself that you are predestined, that you are created unchangeable!" There is a rich, exquisite debate that follows between them about free will ("Every man can interpret a poem his own way, but she will always be the same - the way the poet imagined her"; "Maybe every one of us is a book for itself and everyone has its own writer"), and it ends with a notion that Mobil's thoughts are so strong they cause Adam to "move" outside his world ("I don't know why I influenced you to start thinking, instead of you influencing me to stop thinking").

This conversation proves as a major intellectual catalyst, sending Adam on a quest for meaning where he meets three characters on his path. The first one is a mysterious, bald man buried up to his chest in earth, stuck, trying to reach some apples around him, who represents the crippled, the disabled and the sick, and who thus reject the notion of an author (God) because life is awful. The second one is Thomas, a man hanging from a tree who does not have any opinion of his own, and who represents people who reject an author because life has no meaning. The third person is a painter (director Veno Musinovic himself), who represents creative people who are the closest to understanding an author, but who actually claims that the author may have abandoned reaching the conclusion of the final chapter of the book, and that they are stuck in this pretty, yet unfinished world, and thus may represent people keen of mysticism and alternative gnosticism. Finally, the movie ends in one of the most astonishing ideas to make a conclusion - namely that Adam is just a supporting character in the book, and that his life is thus subordinate to that of Doel Belang, the title character (who never makes an appearance). This is extraordinary and highly original, with an inversion of atheist questions about neglected people, by posing a restructured question if there may be a higher purpose - but a one where you, your world, or your Universe are just a supporting cog in the wheel, while the main raison d'etre is about something else, outside of known. What if the creator has a completely different concept of a meaning than the creation? "Doel Belang" is an incredibly rich, elevated philosophical essay, with wisdom rarely displayed anywhere else up to that point. Some works of art are unknown due to a lack of promotion - but good things cannot remain forgotten for too long, and will resurface one way or another.