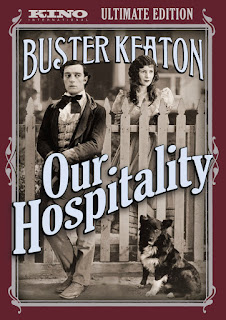 In a small town somewhere in the American south, the Canfield and McKay family have been at feud for generations, even though nobody knows what they were arguing in the first place. When her husband gets killed by one of the Canfield members, Mrs. McKay decides to send her son, Willie, to live with her aunt in New York, far away from all this hate. However, as a grown man, Willie takes a train to return to his hometown, since he intends to inherit the McKay estate. He meets a girl there, Vriginia, and she invites him to her home - as it turns out, it is the home of the Canfield family. Since the tradition prohibits that they kill someone who is their guest, Willie decides to stay in the house for as long as possible. In the end, after a lot of troubles, he save Virginia from a waterfall, and they get married, effectively ending the feud.

Even though it does not reach the creative heights of his best movies, such as "The General", "Steamboat Bill Jr." or "Sherlock, Jr.", "Our Hospitality" is still a very good comedy from one of the pioneers of the silent era, Buster Keaton, and is somewhere even regarded as a neglected gem in his filmography. Actually, truth be told, the movie basically spaced out its entire storyline between just two highlights (the hilarious train trip with "flexible" rail track, which culminates with such absurd moments as the train and the waggons driving over a large "bump" on their path without problem or when the train even at one point continues driving on a road, needing no tracks what so ever (!); the spectacular stunt on the waterfall), while the middle is somewhat overstretched, with a couple of empty walks, yet the narrative is competent enough to pull it off in a very positive outcome, giving Keaton again room to demonstrate his inventive stunts and gags, as well as subtly sending a pacifist - and ironic - message of the pointless feud between two families united by love of their children, which can be interpreted as an allegory of numerous conflicts in history where two nations were battling each other and feeling animosity because it was their "tradition", even though nobody knows why they are still continuing it at all.