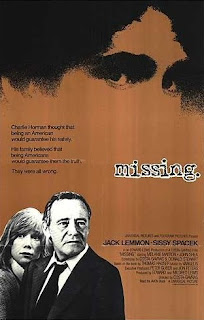 Chile, '73. Young American writer and idealist Charlie Horman is living with his wife Beth in Santiago. He is surprised when the bloody coup d'etat starts and the military executes Left-wing president Salvador Allende and replaces him with Right-wing Pinochet. Numerous Left-wing activists are arrested and Charlie disappears one day with them. His father, Ed Horman, a conservative from New York, flies to Santiago to find his son. He teams up with Beth and searches in hospitals and morgues. They question Terry who tells them Charlie discovered US military officials were backing up the coup. And because he knew too much, Charlie was executed. Angered, Ed sues the US embassy staff and even Henry Kissinger, but looses.

"Missing" is a quiet, sophisticated political drama that even today manages to stir up some rigid beliefs and send a subversive message. Director Costa-Gavras used the true event about the search for the missing US Leftist Charlie Horman as an inducement for his views about the secret agenda of the governments and their misleading characteristics, which resulted in a few excellent, sharp moments, like when Ed and Beth go to a morgue and inspect literally hundreds of half-naked corpses lying on the floor to see if their missing Charlie is among them, which later on rings painfully when the author accuses the US politicians of backing up the '73 Chile coup d'etat. But, in doing so, the story and the film itself are somehow mild, pale and sustained, as if they stopped just a step before really igniting the audience, which results in a half-hearted feeling not because the movie is weak, but because it could have easily been great but was somehow "too lazy" to pass the final step. It's probably Gavras most emotional American film, but the only two truly outstanding virtues in it are the brilliant Jack Lemmon, who made some of his best performances in his older age, in an untypical role for him, and the enchanting score by Vangelis which is, without exaggeration, one of the finest movie scores of the 20th Century. It seems that despite all the right moves something is missing in "Missing" since it's a quality film but not to that extent that it justifies all its awards.