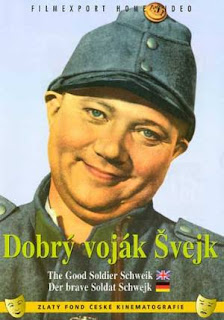 Dobry vojak Švejk; comedy, Czech Republic, 1957; D: Karel Steklý, S: Rudolf Hrusínský, Svatopluk Benes, Milos Kopecký, Josef Hlinomaz, Bozena Havlícková, Eva Svoboda
Prague, 1914'. The naive dog seller Švejk publicly predicts there is going to be war in Austria-Hungary after the assassination in Sarajevo, and thus gets arrested in a pub. He ends up in a mental asylum and then in the army after the World War I starts. He becomes an assistant to a military priest and then to Lieutenant Lukaš. When he steals the General's dog for Lukaš, they both end up in train heading towards the battle front. Švjek gets lost but finds the army again. He dresses up in a Russian uniform and gets arrested and then released. During bombardment, he just stands still.

With the comedy novel "Good Soldier Svejk", Jaroslav Hašek wrote one of the funniest pieces of literature in general, masterfully spoofing the politics of Austria-Hungary. This 3 hour adaptation from 1957 in uninspired direction by Karel Stekly doesn't even contain 10 % of humor from that jewel of comedy. Instead of simply copying the funniest jokes from the novel and bringing them on the screen (which would be slavery, but a faithful adaptation), director Stekly decided to "surprise" the fans with added, "original" jokes that are not to be found in the novel - for a good reason, because they are not that funny. The funniest parts of "Svejk" are not even in the film, like in the exposition of the novel where Mrs. Muller and Svejk talked about the assassination of Franz Ferdinand in Sarajevo ("And so they killed our Ferdinand!" - "Which? Kokoschka or the one who works in the pharmacy? Either way, it's not a big loss." - "No, the son of the Emperor! They killed him in Sarajevo!" - "How can such a fine gentlemen allow that to happen to him?"). Sadly, many dialogues and scenes were changed in the movie, but Stekly is no Hašek. Only here and there does this movie version of Svejk manage to conjure up a few hilarious gags, like when he accidentally insults a bald man in the train, while his Lieutenant Lukaš reads on the baggage that the bald man is actually their General.