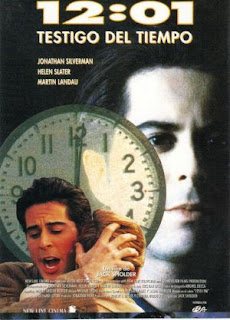 The story follows one day in the life of a certain Barry Thomas: he wakes up at 7:35, gets a phone call from his mother, comes late to work due to traffic, gets snubbed by his boss, spots the beautiful Lisa who doesn't even notice him and who later on gets killed, and then returns back home. But to his surprise, the following day all the events gets repeated just like yesterday, while he is the only one to notice it. And the next day and the next day. With a little effort, Barry discovers that the time got "stuck" accidentally by Dr. Moxley with his time machine, so he tries to stop him and save Lisa's life. He succeeds and destroys the machine.

"12:01" is a TV movie with a small budget, but high quality. The money actually even isn't an issue here since director Jack Sholder skilfully evokes one A-film in every aspect. The irresistible idea - based on Richard Lupoff's short story and short movie also called "12:01" - served as a pump for unfailing events and actions, while actor Jonathan Silverman starts many sparkling cynical and ironical moments, giving the movie a refreshing dose of humor. It's a matter of a really good and masterfully made work, but the clumsy ending is quite weaker than the whole and the explanation for the day repeating itself again and again is rather cheap and unnecessary. To their disadvantage, the plot wise identical movie "Groundhog day" showed up that year and already played in the cinemas for 5 months before it, where Murray's adventures where just a small notch better, maybe because they weren't so complicated and bloody.