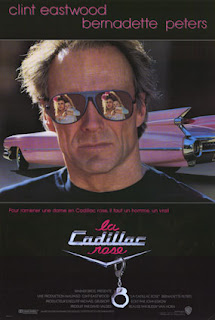 Detective Tom Novak isn't the youngest anymore, but he still searches and hunts outlaws with ease. At the same time, Lou-Ann lives with her baby in a trailer while her husband Roy reveals he started counterfeiting money with his friends. When the police marches into the trailer, Lou-Ann gets falsely arrested but released after a bail. She runs away with her husband's pink Cadillac, but then discovers his fake money is in it. In order to take revenge on him, she starts spending the money in a casino where she gets arrested by Tom. But they fall in love and become friends. In order to get his money back, Roy kidnaps her baby. But Tom enters into his territory and frees the baby, running away with Lou-Ann into the unknown.

Many critics unjustifiably pronounced "Pink Cadillac" a bad film, but it's a matter of a proportionally rather amusing little flick, just with a weak story: it handles about some kind of chase carried out by the detective Tom (Clint Eastwood repeating for the 100th time his cliche role of a tough guy, just with a kind heart) - where he came from, what are his thoughts or what he found in Lou-Ann, all those are things that are left sadly underused, uneven and vague, just like the interesting open ending. The bad guys are a catastrophe. But somewhere around the start, "Cadillac" has a few great gags to offer: in one of them, heroine Lou-Ann arrives at the door of the landlord and says to him: "You remember when I came to you last month and paid you the rent?" He replies with: "Yes, that was the best day of my life!", upon which she says: "Can I have my money back?" Somewhere 30 minutes into the film, the then unknown Jim Carrey has a small role as an entertainer in a casino, and there are other small roles of good actors present throughout, but as a whole the film simply lacks energy and one can sense it wasn't made with effort, just with routine.