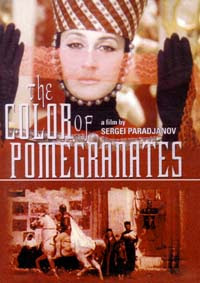 In 8 chapters does the film suggestively follow the Armenian poet Sayat Nova who lived in the 18th Century. The film follows his childhood, adolescence, his way to a monastery and death, but instead of a clear, linear or even logical biopic, director Sergei Parajanov decided to craft it as an avant-garde film. Firstly, there is no clear story but just a mass of abstract images, which is obvious already in the exposition: an open book shows up in the shot, followed by three apples and a knife from which red liquid drips and spills on a white sheet. The viewer is stimulated to draw either his own interpretations of the symbolical power of the birth of an artistic soul or either to simply enjoy the weird spectacle. Secondly, the main hero, if we exclude singing, doesn't say a single line throughout the entire film!

Obviously Parajanov decided to describe his life with symbols, not dialogues, and masterful shot composition. Everything is filled with surreal scenes: a horse passes by Sayat as a boy and his parents who look directly in the camera. Sayat the boy meets Sayat the adult. The adult Sayat looks directly in the camera while holding a skull in his arm, while in the background the wind is moving the pages of a book on the floor. Some woman holds a veil above her eyes. Sayat digs a grave while surrounded by sheeps. When he dies white roosters fall by him and tip the candles on the ground. "Sayat Nova" isn't a film for all those viewers who are not in the mood for "heavy fun", but a strange labyrinth and it would be very interesting to see how the screenplay looked like since there are practically no words in it. The result is a film that's incomprehensible, thin, weird and artificial, causing it even to get banned in the Soviet Union back in those days, but it's somehow pure genius.