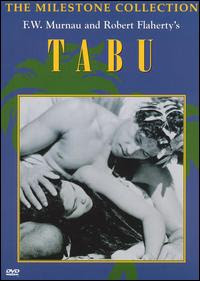 Island Bora-Bora, Polynesia. The natives lives isolated from civilisation and live from fishing. The young Matahi saves the girl Reri from a fight with another woman and the two of them fall in love. One day a French ship shows up on the sea carrying a message from a different island: a virgin girl who was supposed to be sacrificed to the Gods died, thus Reri has to take her place. Since it's now taboo to touch her as a chosen virgin, Matahi and Reri run away. On some island he finds a job as a diver for a evil Chinese. Reri returns with Hitu back to Bora-Bora while Matahi drowns.

The last film from famous German director F. W. Murnau disappointed his fans: silent adventure drama "Tabu" shows the old culture in Polynesia is surprisingly overstretched, routine, stiff and inert way. The basic story is daringly provocative because in showing the isolated culture of Bora-Bora where it is forbidden to touch a virgin girl in order to sacrifice her to the Gods, but she is in love with Matahi who wants to save her, it actually speaks about the difficult issues of misguided traditions that were presented as normal, contemplating about people who are not free because of them and showing how different societies all have different rituals. Both the girl Reri and her lover Matahi were not played by actors but by real natives, but instead of a refined portrait of a troublesome relationship Murnau chose a simple story where the couple runs away to a different island, falling into the trap of becoming just a "dated black and white film". The relationship of the couple is quite boring because they don't even kiss or have chemistry, while the demanding tone is ephemera. Only some scenes are interesting, like when the letters from the titles of a foreign language transform into English words in order for the viewers to understand them, but as a whole it's a tiresome film that caught Murnau on wrong foot.