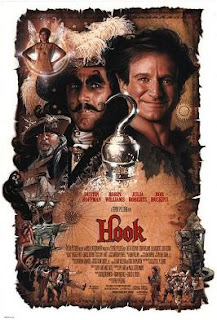 Peter Banning is a busy lawyer who doesn't have too much time for his wife Moira or kids Jack and Maggie. When the estranged family goes to London in order for Peter to visit Moira's grandmother Wendy, his kids get kidnapped and the only clue is a ransom note signed with the name Hook. When the little fairy Tinkerbell enters the house, she transports the bewildered Peter to Neverland and tells him that he is actually Peter Pan, except that he forgot about it. Captain Hook, who kidnapped his children, gives him three days to remember who he really is. Together with the suspicious lost boys and Tinkerbell, Peter remembers who he is and starts flying again. Hook gets eaten by a stuffed crocodile while Peter and the kids return back to London.

"Hook", critically one of Steven Spielberg's most bashed and unpopular achievements, is an unusual film that almost seems like a bizarre "New Age" sequel to the story of Peter Pan. The tragic figure of the imaginative, open minded boy Peter Pan who in the modern society grew up to become a sad, tiresome, realistic lawyer with a broken spirit who doesn't even have time to be with his own kids due to his job is an extremely stimulative concept that probably drew Spielberg to the project, maybe because behind a kids film there lies a melancholic theme about transience and an individual realizing his life is slowly passing by him. However, a lot of the film was ruined due to its silly tone, including the annoying brats from Neverland, dumb humor, forceful moments and irritating screaming, not to mention the awful finale that embraced the poorest cliches, among them even the one of the elimination of the chief bad guy. Indeed, the bizarre story remained just that, a bizarre story where a lot of things turned wrong, yet one can't quite shake away the feeling that "Hook" is something like a 'guilty pleasure' that surprisingly has its fair share of magic moments, equipped with Spielberg's trademark of angelic portrait of his characters, which caused at least two sequences to turn out incredibly emotional. In one of them, Rufio draws a line on the ground and tells all the boys to go on his side if they think that Peter, the adult, is not the long lost Peter Pan. All the boys do, except for a little kid who stays on Peter's side, stares at him, touches his face and then says: "You are Peter Pan", which causes some of the boys to go on his side. The touching second one is when Tinkerbell found the lost Pan as a baby and took him to Neverland, in an expressionistic image that contemplates about death and escapism to a better world.