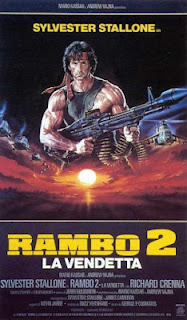 After the commotion in the first film, John Rambo is serving his sentence in prison. His former commander, Trautman, and a certain Marshall Murdock ofer to bail him out if he goes to Vietnam to find and "make photos" of American POWs. Once there, against these commands, Rambo saves one of the POWs from torture - as a consequence, Murdock leaves him alone, at the mercy of the Vietnamese army. After a lot of troubles in the jungle, Rambo is able to escape and free the hostages. He returns and confronts Murdock.

The naive-unconvincing sequel to the first film, "Rambo 2" is just a simplistic action vehicle for Sylvester Stallone, yet even though it is worse than the original, it still had at least slightly more cohesive story than when the title hero fought against the police for life and death in the forest just because they had a misunderstanding. As a 'guilty pleasure', "Rambo 2" is only fun for action fans whereas it has too little truly quality scenes or ideas, which is even further burdened by some strange moments, such as the almost clown-like manner in which Rambo starts his odyssey when he gets stuck on the door of a flying airplane. Overall, the movie considers itself way too serious, without almost any scene to add a little irony or humor in the story subordinated to machoism and violence as the only way to prove how 'tough' someone is. Even Schwarzenegger made some films like that, but on at least two occasions ("Conan" and "The Terminator") he also ofered some philosophical and intelligent messages, if you read between the lines, which made them both appealing for action fans and more demanding viewers - likewise, he at least didn't consider himself too serious and allowed a few jokes at his own expense. Not here. Lines such as the one where Thulsa Doom says this to Conan - "When I am gone, you will have never been. What would your world be, without me?" - could never be found in a Rambo film. Only the finale managed to demonstrate cohesive suspense, whereas one dialogue between Rambo and his superior is at least interesting ("These computers are our strongest weapons." - "I thought reason  is the strongest weapon." - "Times change.").