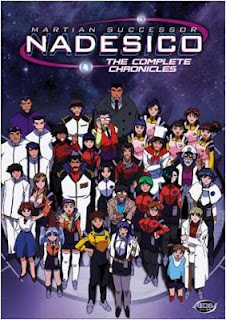 The 22nd century. People are being told that Earth is at war with aliens that invaded the Solar system, known only as the Jovian lizards. One guy, Akito, survived their attack on Mars when he was mysteriously teleported to Earth. He does enlist as a cook in the battleship Nadesico, however, which is commanded by a girl he knew from childhood, Yurika. Among the crew is child prodigy Ruri, Inez, Guy and others. During several back-and-forth fights, they discover that Jovians are actually humans residing on Jupiter, ancestors of people exiled from the Moon after a civil war who thus want revenge against Earth. Furthermore, they too are fans of an anime series, "Gekigengar III". It is discovered that the whole war is just fought to obtain a boson jumping device excavated on Mars.

It is hard to believe that in the 21st edition of the prestigious Animage, "Martian Succesor Nadesico" actually gained the top spot as the best anime in 1998 with 2,196 votes, beating out even "Cowboy Bebop" (# no. 2) and "His and Her Circumstances" (# no. 4)! It is puzzling as to why it gained such popularity in the first place since it is a rather chaotic show with far too many characters that barely get their spot in the sun (with a few notable exceptions, such as the hilarious wise-cracking girl Izumi) with dry robot fights that start to get tiresome which makes the show exhausted towards the end, which is not at all helped by the fact that it didn't resolve anything but just announced a sequel that never materialized. As in a metafilm reference, the main hero Akito loves watching the (fictional) anime "Gekigengar III", but says that the last episode is "the worst ever" - ironically, one can easily concur with him with regards to the last episode of "Nadesico" itself, since it is pure cheating of viewers leaving such an open ending.

However, despite the lack of truly hilarious jokes and boring first four episodes, "Nadesico" still gains some power later on, almost acting as a light version of "M*A*S*H" while spoofing and ridiculing war at every possible chance, even offering a major plot twist regarding the alleged aliens people are fighting. Akito even says this in one episode, after his friend died: "I can’t believe he’s dead and I am the only one who even cares that he’s gone. Nobody cares that people die anymore…Will anyone ever care when I am gone? Sometimes I wonder if I am the crazy one because I don’t understand how people can be like that". Carlos Ross even compared episode five, where a space colony was destroyed, with the "Mary Tyler Moore Show" episode "Chuckles the Clown" in comic poignancy since it is "treated both tastefully and hilariously", though even that is overrated despite a few good laughs in it, such as the one where the captain, Yurika, has to run from one funeral to another, dressed in various appropriate costumes, from a Buddhist monk up to a Jewish Rabbi. The only ingredient that actually lived up to the hype was the fan favorite character of child prodigy Ruri who at first seems like a lifeless girl but actually turns out to be one of the most complex characters in episodes 18 (extremely touching) and 19. Overall, it is a pity that the authors didn't put more effort into the story, since it had potentials, yet it has a few satisfying jokes (Megumi looks into the camera and says: "Who says this show isn't educational?" In the background, Erina asks her: "Who're you talking to?" and she replies with: "The fourth wall!") and a visually inventive idea in episode 9 (focusing out of a popped-up screen onto Akito seen through it).