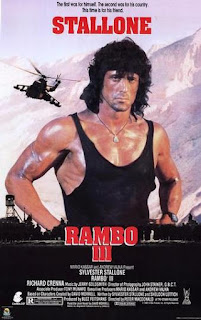 John Rambo lives in a Buddhist temple near Bangkok, where he earns an extra buck by fighting for bets. However, he is again contacted by his friend, Trautman, who wants him to help him supply weapons to Mujahideen for their resistance in the Soviet-Afghan War. Rambo declines, but goes to Afghanistan anyway when Trautman gets captured by the Soviets. With a little help of the local tribes, Rambo rescues Trautman from the Soviet prison camp and eliminates the main commander there.

In part III - as well as in part II - the character of John Rambo strayed away as far as it could have been possible from the main anti-war message of the first movie (which, albeit, even strayed away from the original novel, itself), namely that war scars people psychologically and that they cannot return to living a normal life: here, Rambo made a 180 degree turn and embraced war as a simplistic action fun, almost glorifying violence at some moments, as if it was all a game. The main political engagement - the hero fights for the Mujahideen against the Soviet War against Afghanistan - is well meant, and is thus honest. Yet the story is simplistic. Filled with dialogues so banal that it is unintentionally comical ("What is that?" - "A blue light." - "What does it do?" - "It turns blue."; "It's a game. You throw the sheep in the circle." - "Why?" - "Err... Because there's a circle there."), impossible action sequences that border on a fantasy film (Rambo has an infinite amunition; nobody can shoot him but he can shoot everyone else; he makes no sound when he breaks into the Soviet fort; he survives every explosion), misguided ideas (a child as Rambo's fighter) and constant black and white solutions, "Rambo 3" is a simplistic action flick with even more simplistic story (Rambo goes to save Trautman from a Soviet fort, the end), though a 'guilty pleasure', where only the fine cinematography and locations can be considered as virtues.