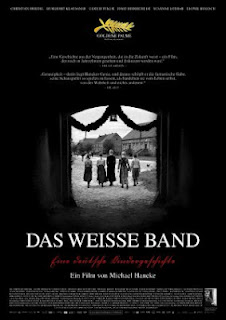 Northern Germany, early 20th century. A young teacher starts working in a village and chronicles strange acts of evil: a doctor falls off his horse that tripped on a wire tied between two trees; a local barn is set on fire; a handicapped child is severally beaten and injured. The perpetrators are unknown. However, before he leaves, the teacher assumes the evil deeds might have been perpetrated by the children of the local pastor and/or doctor who were very oppressive and rigid towards them - a pastor even tied his teenage son to bed so that he won't be able to masturbate, while the doctor humiliated his wife and harassed his 14-year old daughter.

Michael Haneke has an interesting fate as a director: at first, his films were ignored (except for "Funny Games"), and then later on, in his 60s, he delivered three classics in a row that earned him widespread attention and critical acclaim, even securing him a place as one of only a handful of directors who won the Golden Palm twice. Winner of the Golden Palm in Cannes and the Golden Globe as best foreign language film, Haneke's "The White Ribbon" is a heavy art-drama that will not reach everyone, but has a few deeply contemplative thoughts and thought provoking questions about the ever evasive origin of evil. Throughout the story, evil acts are perpetrated in the village by unknown villains (who are not even revealed directly in the end) - what Haneke did was to deliberately not show the face of evil, thereby leaving it evasive, all around us, i.e. implying that it is a state, not just a physically isolated character. More so, since the film ends with World War I, it almost contemplates how the generation in that time was somehow "infected", cursed with suppressed aggression which was eventually channelled into a bloodbath worldwide. The characters in the film - the pastor, the doctor, the baron - are presented as dogmatic leaders who suppress their children, imposing on them strict discipline and rigid obedience, which caused the children to probably lash their hate on others - some have interpreted this as commentary at who raised the generation that will later become the Nazi state, which poses a few disturbing questions about the inadequacy and nature of absolute authority everywhere, even today in numerous dictatorships. However, the movie is overlong, grey and some of its characters are indeed unmemorable, which, combined with the anti-climatic, vague ending slightly damps its enjoyment value.