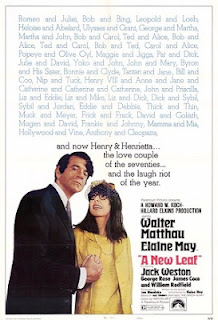 With his wasteful actions, Henry Graham exhausted his fortune so he accepts the advice of his butler to marry a rich woman. He finds an easy target, the "nerdy" botanical professor Henrietta who is the only heir of a rich family. Not used to any attention, she is easily charmed by Henry and agrees to marry him. He intends to kill her during a rafting vacation, but still saves her from the river since she named a new plant she discovered after him.

The first out of only four feature length films directed by Elaine May, the everlasting outsider in movie business, "A New Leaf" is in today's edition only a rump version of her original three hour film, cut by an hour by the producers, but it still seems fresh and proportionally quite circled out anyway. Too bad her director's cut will probably never be released, but it is an untypical and cynical take on the genre of romantic comedy blended with the Bluebeard story and Chaplin's "Monsieur Verdoux", and also a sly commentary on capitalism with one legendary quote said by the butler: "In a country where every man is what he has, he who has very little, is nobody very much." May is so adorable as the shy-secluded Henrietta and in her scenes with Henry (Walter Matthau) that May the director even abandons the black humor of the first half in order to give room for a few honest moments of a love story, especially in the charmingly illogical sequence where Henrietta is so convinced that Henry is not marrying her for her money that she immediately decides to give him all her fortune for this reason: "If I were to write all his checks, then everyone would think that he truly married me only for them, but if I already give him all the money, then nobody will think that he is marrying me for it." Not all jokes work, the middle part drags a little bit and the actor playing the lawyer hams it up a bit, yet overall this a surprisingly good film.