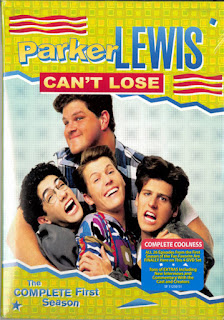 Teenager Parker Lewis and his friends, music fan Mikey and the intelligent Jerry, try to make the best out of their annoying years in the Santa Domingo high school, frequently outsmarting the rigid principal Mrs. Musso and her henchman, Frank. Parker's parents work in a video rental store whereas his little sister Shelley always tries to wreck his moves. The super-strong Larry Kubiac slowly becomes his friend. Parker also finds a girlfriend after a while.

Even though it is a loose spin-off of it, "Parker Lewis Can't Lose" is actually what "Ferris Bueller" should have been - even by today's standards, this cult show is one of the better comedies in the 90s of the TV format that stimulates the mind through its inventive-dynamic visual style, shrill ideas, extremely correct jokes, a good sense of understanding teenagers as well as a likable hero, unlike Bueller. Other characters all have a seal of uniqueness, from the "mean" Mrs. Musso up to the annoying sister Shelley, but a special charm is given by Abraham Benrubi who gave the role of a lifetime as the phenomenal Larry Kubiac who undergoes an amazing transition from a school bully in the first episodes to a lovable gentle giant.

Author Clyde Phillips truly demonstrated a sense for wacky jokes: from the scene where Kubiac is so "tough" that even his tear destroys the floor when it falls on it, through spoofing the classic joke of a "disruptive event" just before someone's photo is taken (a chicken randomly flies pass Mikey's face who bursts in laughter before the photo flash) up to neat sight gags (a student driving through the school corridor on a motorcycle). A 'tour-de-force' of the show was achieved in a legendary episode,  Raging Kube, where Kubiac became a pacifist for his girlfriend, but a new school bully challenges him for a duel which culminates in a howlingly funny finale - sufficient to say it involves a school bus. Even those who completely forgot about "Parker Lewis" still have at least some kind of trace of memory of that delicious episode. Unfortunately, the impression is spoiled by the third, last season that wrecked the show with dry and schematic execution that - despite a funny new character, coach Hank (John Pinette) - only showed that "Parker's" characters went on but their wit remained somewhere in season two. Corin Nemec's dreadful new hair due didn't help either. However, third season excluding, this is still one of the more positive shows from its era.

I remember loving this show!

This was one of my favorites back then when it was on TV. It was appealing watching such jokes that are both childish and clever at the same time, some of which almost reach comic-book proportions. The duel in the Raging Kube episode still makes me chuckle. One nostalgic clip on youtube even has this tagline from a user: Parker Lewis - back when TV was actually cool.

At least it wasn't the kind of show I would see these days that act all obnoxious on purpose.