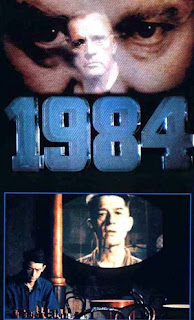 London, Airstrip One, 1984. The society is ruled by a totalitarian superstate, Oceania, through a supreme leader Big brother, who may not even exist, in which he constantly stimulates the public for a war with Euroasia and Africa, even though nobody knows why, and spreading messages that life and the economy are getting better and better, even though they are worse and worse. Winston Smith works in the Ministry of Truth as a clerk who changes historical events according to the wishes of the Party. One day, he meets the open minded Julia with whom he starts a relationship and philosophising about the unbearable life they are living. But they get discovered by the police. O'Brien, a high ranking member of the Party, brain washes Winston, makes him betray Julia and endorse Big Brother.

Out of the brilliant anti-Utopian novel "1984" by George Orwell one could have made a cinematic masterwork, which, unfortunately, wasn't achieved in the movie adaptation of the same title directed by Michael Radford and released, ironically, in 1984. The authors crafted the film too dry and sterile, losing the original satirical touch, magnificent philosophical questions (doublethink, manipulation of the masses, "invisible" dictatorship) and poetry (the wonderful scene in the book in which Winston thinks how Julia, by taking off her clothes, is almost "wiping out a whole culture" is in the film only reduced to Julia taking her clothes off), but John Hurt is once again in top notch shape, whereas in traces there still remained some contemplative messages and themes about human ignorance and an imprisoned human spirit which became a slave of imposed rules, norms and false illusions.

I think a lot of this one. 1984 is THE most important political book of the 20th century, but it's very much a literary work, full of ideas that, while capable of being discussed at length on a page, are practically impossible to convey on a screen. I think the film visualizes its world as well as any film could be expected to do so, and covers the mechanical actions of the characters in the book, while still managing to work in enough of the ideas to make it all work as a very good adaptation. It's certainly superior to the VERY unfortunate first effort to adapt the book to the screen decades before this one.

The book is fantastic, but to tramsit its ideas and quality to the screen, you really have to have a lot of talent - and luck. Because, in all honesty, only a 3 hour film would do the book justice, taking enough time to explore all the issues. This film did a solid job, though.