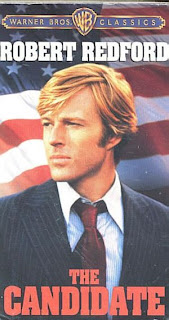 After losing another Senate election to the Republicans, Democrat election specialist Marvin, realizing they will lose anyway, persuades idealistic lawyer Bill McKay to candidate for the Senate elections in California. After studying his rival, Republican candidate Jarmon, Bill figures he is strongly against his political views and supports more social welfare and liberalism. But the political experts slowly change him and condition him to talk to the masses in a calculated manner. After months of election campaigns, Bill wins, but is confused and doesn't know what to do next.

A biting satirical-analytical view into political election campaigns and off stage games behind it, "The Candidate" is a film that managed to hit the nail on the head since situations displayed in it still seem relevant today, as if nothing changed, which is why some critics recommend its frequent viewings during every election. Robert Redford does a great job as the idealistic candidate Bill McKay who is slowly conditioned to act like a robot in order to win the election, yet most of the credit should be given to the daring screenplay by Jeremy Larner; in one scene, where they are preparing Bill in a rehearsal interview, a reporter asks him if he would "draw the line in Vietnam". Bill says he wouldn't, upon which he asks the trick question: "And when do you think we should stand up to the Communists? On the beaches of Santa Monica?" Bill is confused, not knowing what to say in case of such a weird question, but one of his employees has a funny answer: "No, because the parking problem in Santa Monica is bad enough".

In another brilliant sequence, Bill's employees pick the best tapes of his interaction with the people. Bill is wondering why they didn't put his speech in the health clinic, and they play him the tape, which shows how he talks to the nervous women on the bench who are more preoccupied with waiting for the doctor. The analyst then says him the tape in unusable: "You're not cool, nobody is listening to you, nobody digs you." It neatly sums up the leitmotiv how in politics appearance and charisma have become more important than ideas and skills. Finally, in another scene, when they spot a forest fire, they immediately transport Bill there to film him "on the scene during a critical situation", to use it for scoring political points. Natalie Wood has a small cameo as herself trying to talk with Bill, but due to all the distracting commotion they just accept each other and much less lead a normal conversation, showing the chaotic nature of such events - and also mirroring Bill's earlier funny comment on an TV add: "Politicians don't talk. They make noise". Unfortunately, Bill comes across as a too passive character - he does occasionally do something to have his word said, but too rarely - while the ending seems to be too abrupt, as if the writer forgot the point he wanted to say, even though its still a very good film.

This one has long been a favorite of mine. The trends it documented only accelerated in the years after it, and I also strongly recommend Tim Robbins BOB ROBERTS, a mock documentary which is sort of an unofficial sequel, set 20 years later, and showing the further degeneration of the process.

I was surprised how so many things in this 1972 film still apply today. Actually, it brings almost a whole election coverage down to a T. Not just in the US, but around the World. As if nothing changed that much.