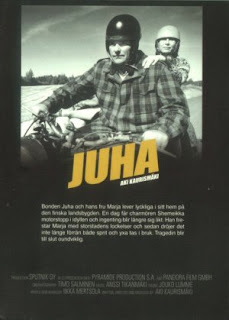 Finland. In a peaceful, idyllic village, there lives a farmer who limps, Juha. He raised the beauty Marja and later married her. In the middle of the road, the car of the suspicious city man Shemeikka breaks down so Juha allows him to stay at his house. The situation becomes complicated because Shemeikka seduces Marja and runs away with her. They have intercourse in the forest. Juha notifies the police but it is powerless since she left voluntarily. Shemeikka puts Marja in his brothel so that she would work as a prostitute. She becomes pregnant and gets a baby. The angry Juha kills Shemeikka with an axe, but himself dies from being hit by his gun.

Aki Kaurismaki continued his twisted opus with an experimental film, the silent black and white drama "Juha" that even has classically written dialogues in form of subtitles, while the only spoken line comes from some woman singing in a brothel. As a real Kaurismaki film, "Juha" is a minimalistic product - i.e. everything is reduced to the minimum, which is why some viewers regard minimalistic films as empty and others as ambitious - with a running time of only 70 minutes, where almost nothing happens. The characters and the mood are idyllic, simple and a little bit passive, up until the tragic end, while an occasional outburst of humor gives it a mild spark, like when Rock 'N Roll music is heard in the background when Marja becomes "rebellious" and puts on make up, though as a whole the movie is too anecdotal.