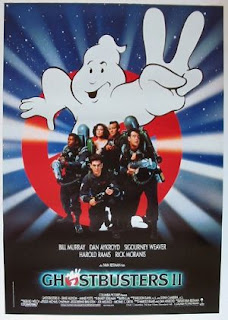 5 years after the last paranormal events in New York, the Ghostbusters are out of work due to "shortage" of ghosts: Peter works as a host of a TV show called "The World of Psychic", Egon works in an institute while Ray and Winston entertain kids. But then a red slime, a materialisation of all the people's negative emotions, starts causing havoc and wakes up Vigo, an evil tyrant from the Carpathian mountains who wants to rule the world by taking the body of Dana's baby Oscar with the help of the clumsy Janos. The Ghostbusters are back fighting ghosts and manage to defeat Vigo by reviving the Statue of Liberty.

5 years was obviously too long for a sequel to appear, explaining why "Ghostbusters 2" were not as popular as the first film: only the crystal clear cinematography by Michael Chapman is an improvement compared to the original, but everything else is more or less just a recap, from the same plot formula that doesn't bring anything new into the film, the more mainstream oriented story, the routine finale with a silly idea involving the Statue of Liberty that undermines the film, up to less awe and successful action and humorous sequences, since there is a certain number of lame gags present that feel forced. Still, even though a large number of critics would like to present it as plainly repetitive, the movie surprisingly still has quite a substantial amount of good ideas: the scene where Peter asks Egon: "Hi, Egon. How's school? I bet those science chicks really dig that large cranium of yours?" and he flat out replies with: "I think they're more interested in my epididymis" shows that the writers still had some intelligent vibe when crafting such a sophisticated example of humor. It is neat to spot Ivan Reitman's little son, Jason, later on an acclaimed director, playing a spoiled kid picking on Ray in the exposition at the party; PETA members will for surely enjoy the moment where the animals of a fur coat of some rich lady suddenly come to life, much to her shock; while the small scene where the Titanic has "finally arrived" and the ghost passengers are exiting on the dock, is a legend. Even though it is a sequel, it is at moments contagiously fun, easily one of the better sequels made in the 80s, especially when compared to some made today.