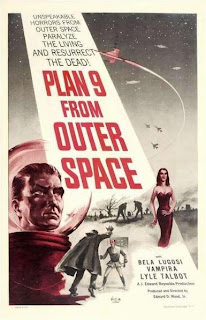 The narrator warns the viewer that he will discover the truth about the UFOs. In an airplane, pilot Jeff spots a UFO and tells all about it to his wife Paula. The aliens, who look like people, are led by leader Eros and believe that the humans are too incompetent and that they could one day invent a Solar bomb that could destroy the Universe. Therefore they use electroshocks to wake up dead people from the graves who will scare the living to death. General Edwards speaks with Jeff and Paula while the corpse of Inspector Clay terrorizes people. Eros lets them into his UFO and they beat him and run away. His UFO explodes in the sky.

Among the anti-classics of cinema, cult C film "Plan 9 from Outer Space" has a distinguished role because it was once declared as "the worst film of all times" due to its highly illogical and amateurish tone, but it's so fun that it is hard to throw it away completely, whereas there were hundreds of worse films made until today that don't make it look that bad anymore. It all starts with a monologue of the narrator Criswell and the tombstones with actors' names written on them (Burton paraphrased this surreal exposition almost scene for scene in his biopic of the director, "Ed Wood") while the trashy plot is filled with absurd lines ("What in the world is that?" - "Nothing from this world!" / "He looked the roses planted by his wife...with her own hands!" / "The UFO attacked a town. A small town, indeed, but a town of people!" / "That's a strange story!" - "But a true one." - "That's why it's so strange!"). Director Edward D. Wood Jr. naively crafted the film, inserting a few scenes with the deceased Bela Lugosi while the rest of his role was filled by an actor who cowered his face the whole time, whereas the sequence of Inspector Clay's rise from the grave is howlingly funny, hilariously unintentionally comical, as is anyway the whole film. The main problem with the ridiculous Sci-Fi story is that Wood actually took it seriously, instead of taking a distance and turning it into a parody, something what the Monty Pythons would have done, because this could have only worked as a comedy.