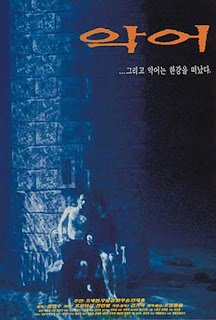 Ag-o; Crime drama, South Korea, 1996; D: Kim Ki-duk, S: Jo Jae-hyeon, Ahn Jae-hong, Wu Yun-gyeong, Jeon Mu-song, Song Geum-sik
A homeless man, called "Crocodile", lives under the bridge at the Han river and occasionally takes the money from people who commit suicide by jumping in the water. He lives with an old man and a little boy. One night, a woman, Hyung-jung, tries to commit suicide, but he saves her from the water, and then rapes her. She runs away, but then comes back and decides to live with them. Their life is hard, and he is often aggressive, even beating up a gay police animator who wanted to sleep with him. He gets wrongfully accused for a murder he did not commit, but gets released. The real killer eliminates the old man. Crocodile discovers the killer is a friend of Hyun-jung's ex-boyfriend, so they kill him. The next morning, she jumps into the river, and Crocodile follows her, drowning with her.

The directorial debut of Kim Ki-duk, "Crocodile" is a sad, gritty, tragic and depressive drama about the cruel life people have to go through. As with most films that defy mainstream, this one also isn't an easy one to watch, but will hold the viewer in turmoil, annoy him, push him around, make him want to give up on it, and question his intentions, but in the end it will reach a satisfying conclusion. Ki-duk leads a raw direction, close to life, but he reduced its value by cramming up too many unnecessary 2-minute subplots that take away from the main plot, revolving around the homeless "Crocodile" and suicidal Hyun-jung, for whom he maybe still did not have enough concentration or skill as a young director. The story is filled with dark details (the little boy injures "Crocodile's" penis with a knife so that he won't rape Hyun-jung anymore), but does contain a fair dose of poetry ("Crocodile" inflates a balloon underwater or uses it as a condom) while the sad ending is beautiful. Even though it seems unsure and not spiritual enough as Ki-duk's "Spring...", this is still a quality made achievement.