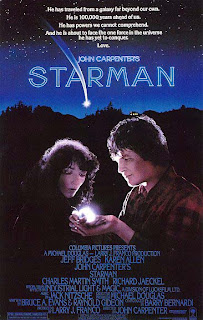 The Voyager probe arrives at some planet and starts playing it's recordings of greetings since it's found by aliens. A UFO crash lands on Earth. An alien comes out of it and, using the DNA from a lock of hair, takes the human shape of Scott, the deceased husband of Jenny, asking her to bring him to Arizona where he can go back home. Jenny is at first baffled, but still decides to help him, starting a long journey in their car, while the military is hunting them down. He leaves in a spaceship and she becomes pregnant by him.

John Carpenter directed the film brilliantly, retaining more on funny misadventures of the alien in human form - thus giving a lot of inevitable observations about our culture - and less about the philosophical questions about its alien world, for which he had a great support in the leading actor Jeff Bridges who delivered a wonderful job portraying a slightly "off" character, for which he was nominated for an Oscar and a Golden Globe as best actor: he acts calmly and always in control even though it is obvious he is out of place on Earth, saying childish lines about traffic lights ("When it's red, don't drive. Green, drive. Yellow, drive very fast.") and imitates the actions of the woman of his body, thus when she kisses a man in the mouth, he does the same; whereas there were also a few clever tricks inserted into the story, like the opening with the Voyager probe playing The Rolling Stones' "(I Can't Get No) Satisfaction" or when the author uses subtitles when the alien protagonists is using his incomprehensible language. It's one of Carpenter's most harmless, gentlest films, and even though a lot more could have been made out of the simple road movie concept, it's still a quality made, touching romantic variation of "E.T." - and the scene where Bridges touches a dead deer and brings it back to life is the most miraculous and enchanting moment in all of Carpenter's films.