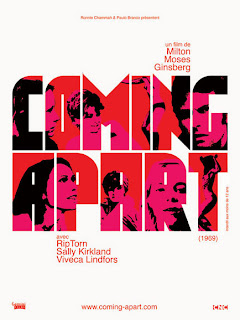 New York. Joe Glazer is a psychiatrist who placed a hidden camera in one of his pictures in order to film his affairs in his apartment. He encounters numerous women: a masochist who wants him to burn cigarettes on her chest; a blond with her baby; a former client; some girls on a party; his former girlfriend. Ultimately, he feels more and more depressed, until he shows the camera to a girl. In slow motion, one girl wrecks his whole apartment.

Cult underground experimental black and white art-drama "Coming Apart" caused a real sensation back in 1969 due to it's free use of erotic, foul language and voyeurism, and it's ferocity still seems undated - but everything else in it does not. The whole film is shot through one angle of the protagonist Joe's hidden camera in his apartment, creating a documentary feel to it, hence the story consists only out of long takes that last up to 10 minutes, but the static tone and the poor insight into the soul of the characters ultimately lead to boredom. All of the women that visit Joe are interesting, but one note episodes, and it doesn't seem that realistic that he could seduce almost everyone of them. In one particularly grim scene, he strips and holds a naked girl, Joann, upside down, casually joking around with her, but when she takes his photo to make a picture, he suddenly looses his temper and wrecks the whole positive mood built between them by aggressively shouting to let it down - obviously, he likes to observe others, but can't tolerate when someone wants to capture him on a photo. The naked girl then nonchalantly dances and tries to save the situation why fooling around, and goes to "ride" his leg like a cowboy. It's a funny moment, but since we don't see the girl anymore, all of her charms go away with her. Bizarrely, even those fascinating voyeuristic insights into private lives become monotone after a while, until this overlong one-sided film becomes just a solid piece of pale cinema.