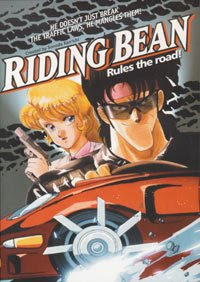 Two masked thieves rob a store, kill a cop and take a naked woman as a hostage for a few moments. Outside they hired the muscle-bound Bean "Road Buster" who takes them with his car to safety and gets a share of their money. The thieves take their masks off: they are woman Salma and the little girl Carrie. Bean lives peacefully in his apartment with his partner Rally Vincent and waits for new assignments. Salma disguises herself and sets them up with Chelsea, the kidnapped daughter of the mayor, thus making them targets for the police. Salma has a pedophile relationship with Carrie and also kidnapped the mayor so that she can get 2 million $ for him. Chelsea becomes friends with Bean and Rally. During a stakeout of the underground parking lot, Salma gets killed. The mayor is released while Bean, Rally and Carrie get away in the car.

Don't expect much from this flat anime action film that reaches deeply for the primitive means in order to satisfy, it seems, only the primitive audience, and among others has a hero so strong that not even a direct car crash can't hurt him, while the story loves empty explosions and other loud events. This is apparently inspired by a story from "The Blues Bros.", but the Blues bros. are never shown and the only thing that reminds of that film is the finale with the car crashes that only then shows some style. It's a trivial, mean and cold "men's flick" OVA stripped from anything but dumbing action - it's level is the same as the "Teletubbies" - and it's a pity Bean's blond partner Rally Vincent isn't more charming or decisive since she seems only like an extra in this, no matter how good her voice actress Naoko Matsui is - Rally would appear later in the by far superior and more fun spin-off "Gunsmith Cats" as the heroine of the story.