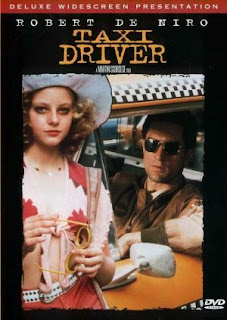 New York. Travis Bickle is a lonely and depressed man suffering from Antisocial personality disorder. Since he has insomnia, he finds a job as a taxi driver at night but has little contact with his fellow colleagues. He falls in love with the blond Betsy, who works for the presidential campaign for Senator Palantine, and they go out for a date, but when he takes her to watch a porn movie, she breaks every contact with him. Travis becomes more and more depressed, buys a gun and leads monologues in front of the mirror. When he meets the 12-year old Iris, who is forced to work as a prostitute, he decides to free her. He kills her pimps and frees her, becoming a hero.

"Taxi Driver" is a very well made film, but it's simply not for everyone's taste due to its extremely depressive and unpleasant story and characters, rounded up by painfully bleak mood, whereas its status and reputation grew so strong that it is really hard to judge it independently as we would an unknown, forgotten film. Winner of the Golden Palm in Cannes, a New York Film Critics Circle Award for best actor (Robert De Niro) and a BAFTA for best supporting actress (Jodie Foster), "Taxi Driver" is a bizarre modern retelling of Ford's "The Searchers": the music and sharp camera angles create suspense and interest even there where it isn't any (the big close up of Travis' eyes; the water splashing on the cab's windshield; a big zoom on aspirin sizzling off in the glass...) while the main concept still remains intriguing and daring.

Namely, Scorsese and screenwriter Paul Schrader bravely tackled the theme of loneliness and isolation - Travis Bickle doesn't have any friends, cannot find a girlfriend and suffers from antisocial personality disorder. In his off-narration, he says how "every day is the same" and how he is "God's loneliest man", whereas the authors show how his alienation turns him more and more into a psychopath who wants to find some meaning or escape from this life. When he dates Betsy, he adores Senator Palantine for whom she works for, but when she breaks up with him, he changes his mind for 180 degrees and even considers assassinating him. These elements are much more interesting than the overhyped, classic scene where Travis looks into his mirror and says: "You're talking to me?" That's why it's justified that this is a one-man-show and all other characters are just little episodes in his life. The middle part of the film is heavily overstretched and aimless, but some fans argued that it just stays faithful to the motif of the film that shows how Travis' whole life is a boring mess and how he aimlessly wonders through the world desperately searching for some goal. Albert Brooks has a neat little role as Betsy's comic partner Tom who tries to light up a match with only two finger, but Foster, who was barely 14 when she shot the film, really steals the show as the underage prostitute Iris who finally gives Travis a goal in his life, underlying how everything in life needs to get in order.

Hello. This post is likeable, and your blog is very interesting, congratulations :-). I will add in my blogroll =). If possible gives a last there on my blog, it is about the Câmera Digital, I hope you enjoy. The address is http://camera-fotografica-digital.blogspot.com. A hug.