A Place in the Sun 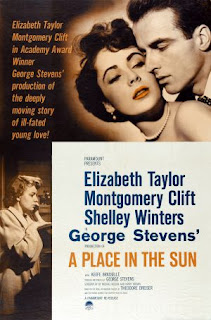 Poor George Eastman arrives at the factory of his uncle who promised him a job. There he gets a modest place as a worker who sorts packages. One night he meets Alice in cinema, who also works in the factory, and falls in love with her. The young couple is happy up until one day George doesn't meet the rich Angela and also falls in love with her. But just then Alice announces she is pregnant so he decides to kill her on a boat in the lake. He changes his mind, but Alice drowns in an accident and he lands in prison.

Winner of one Golden Globe (best motion picture - drama) and 6 Oscars (best director, screenplay, cinematography, costume design, editing, music), "A Place in the Sun" is a touching and convincing achievement that works up until the slightly banal finale that is clumsy in entering the crime genre. Still, despite an uneven ending, "Place" is still an excellent film that isn't especially famous or glamorous, whereas Montgomery Clift is great in the leading role of George, a man torn between two women, where the story obviously hints at polyandry and explores that theme. Some scene are directed cheerfully (when George gets employed in the factory where all the workers are women, one of them "enthusiastically" whistles at his appearance) while some are very poetic (George and Alice passionately hug and the camera moves away to the view from the window. Then, in a time cut, the night on the window gets "replaced" by day and shows how George exits the house) despite the obvious stiff rules in the tame 50s, and director Stevens shows a very sophisticated sense for understanding his characters.