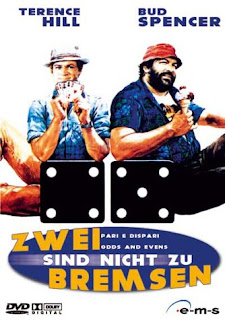 Florida. Lieutenant Johnny works for the Office of Naval Intelligence. Since the mafia controls a whole line of casinos that cheat and rob numerous sailors at gambling, he gets the assignment to stop their double crossing system. Since Johnny doesn't have a clue about gambling, he decides to get help from his half brother Charlie, a corpulent truck driver who decided never to bet again. By teasing him, using tricks so that Charlie can pick him up as a passenger and then stealing his truck, he tries to get his attention. Finally, he persuades Charlie to help him in order to earn enough for the operation for their father, who pretends to be blind. Johnny and Charlie beat up the mafia crew in their casino yacht and give the money to the orphanage.

"Odds and Evens" is a very weak comedy and one of the reasons why Bud Spencer and Terence Hill films have such a negative reputation today, even though they made a few really fun films. The routine direction and tiresome writing of the vague story that isn't exactly clear undermine the solid chemistry between the two "Italian Laurel and Hardy" comedians, resulting in an obviously lame comedy. The exotic locations of this Italian production, this time centered in Florida, are neat, and some gags are amusing, like when Johnny (Hill) looks at the photo of a shaved, corpulent man (Spencer) and then uses a felt-tip pen to draw him a beard, recognizing him, or when he pretends he doesn't know how to play poker in front of the mobsters, yet they barely compensate for the exhausting, uninspiring plot and cheap goofiness (revolving mostly only about the slightly annoying Johnny teasing Charlie) whose only purpose is to finally arrive at the finale that culminates in the fist fights of the two stars and their opponents.