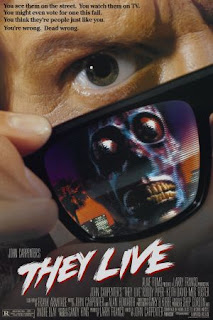 A homeless man is searching for a job in Los Angeles. He finds work at a construction site and meets Frank who takes him to a local shantytown. Accidentally, he discovers the local church is actually just a facade for a group who fights against social oppressors. After the police crackdown, he finds one of their special sunglasses and is shocked to find out they work as an X-ray device, showing the real world in black and white - where alien ghouls have secretly taken the identity of the people and rule the world through TV and industry. He meets Holly and persuades Frank to join him and the group. The two of them enter an underground hallway where they attack the local TV station that airs the alien signals. Holly kills Frank and him, but he manages to destroy the antenna, making everyone realize they are among them for the first time.

"They Live" wasn't a box office hit because the audience thought, considering it was directed by John Carpenter, that it was just another of his typical horror slasher films, but it wasn't at all - not by a long shot. It is one of the most surprising films of the 1980's, since one would have expected Carpenter to be the last person capable of making such a sharp social commentary and a biting satire on totalitarian society, equal even to George Orwell's "Nineteen Eighty-Four". From the exposition where the homeless hero is searching for any kind of job and hears numerous paroles about social injustice, exploitation of the poor people and injustice of the rich class, the story quietly sets up all of it's means necessary to start to the main plot tangle when he finds a special kind of sunglasses, puts them on - and realizes they work as an X-ray device, showing the real world humans can't see.

For instance, he spots an ordinary looking billboard for a computer add, but when he puts the glasses on he sees the real, subliminal message behind it: "Obey". He looks at a woman in a bikini and sees: "Marry and reproduce". And then he goes on and on through the town, discovering all sorts of hidden messages in adds and magazines; "Consume", "Conform", "No Independent thought"...the highlight is when he spots some dollar notes in a man's hand and sees: "This is your God". The fantastic thing about this amazing concept, based on Ray Nelson's short story "Eight O'Clock in the Morning", is that it actually has sense and seems timeless, mocking the human ignorance who was unable to notice how they are actually ruled by evil aliens who brainwashed them with propaganda, subversively creating an anti-establishment punch that is powerful, even though the story could have been more versatile, better made and different than the standard action finale. It's obvious Carpenter made a sly slap at yuppies, lobbyists and dictators who are "among us", but we cannot detect them. Rarely was there such an example of subersive cinema.