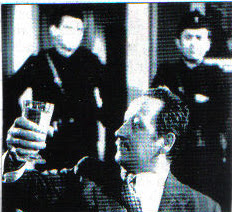 Trogir. There hasn't been a murder in town for over a 100 years. The walls of an old house collapse, a man is dancing and shouting. Fishes and Seahorses are swimming in the sea, the children are playing, but all of a sudden they start to fight. The sea stirs up, a storm is coming. Some youngsters, among them Piero Cotto, place an owl and wait for it to fly away, but the bird doesn't move. Meat is sold on the market and people are preparing to butcher some animals, while a passerby falls unconscious . The Italian occupiers show up and the town is split between their supporters and their opponents. Piero decides to support the Italian soldiers, molests the town's Patricia and destroys monuments with his colleagues. In the end, he kills Kaya, the owner of a store.

"Kaya, I'll Kill You!", considered by some to be the creative highlight of director Vatroslav Mimica, is a bizarre surreal, episodic and dreamlike art-drama without a real story, which will revolt the viewers used to clear plots, but those with an open mind, who like experimental films with abstract symbols, might even enjoy it. Even though the visual style is standard and the characters ended up like some puppets whose personality is not as important as the author's vision, and despite the fact that some messages are pretentious, there is some abstract quality in this unusual film. Some images are pure poetry, like flowers that grow on the wall or the storm on the sea (the symbol of World War II approaching), while completely allegorical is the insane scene where soldiers become mad and stab their knives into the wall. Obviously, this story about the apparition of evil among the innocent citizens, embodied in militant, violent Fascist occupiers is powerful and contemplative, even though the film is somewhat cold.